The People of Mt. Pinatubo

February 10, 2014 · by meanderman · in Philippines, Southeast Asia · Leave a comment

Our first glimpse of the Aeta children came about 20 minutes into the journey up the rugged slopes of Mt. Pinatubo. We climbed out of the back of a four-wheel drive Jeep at the mouth of a canyon just after daybreak on a recent Sunday and watched as the kids walked toward us across the desolate landscape. One of the six expats in our convoy handed out cookies. The children ate in silence, then waved at us tentatively as our Jeep clambered up the canyon a few minutes later.

Before Mt. Pinatubo blew its top in 1991, the Aetas lived in solitude on the mountain. They avoided contact with civilization, sustaining a nomadic existence by hunting and gathering in the lush jungle. Many of them died after the eruption of Mt. Pinatubo, an explosion roughly 10 times larger than the 1980 eruption of Mt. St. Helens. Indigenous survivors were forced to relocate in surrounding towns and cities. They shed loincloths and adopted modern clothing, but never quite took to civilized life. They returned to Mt. Pinatubo in 2001, erecting primitive settlements in the jagged foothills, which remain largely denuded of vegetation since the eruption.

We got out of the Jeep about four miles down from the crater of the volcano, and were led uphill by a three-man team of Pinaykeypoint tour guides. Robin Corpuz, the 44-year-old leader of the expedition, stopped often along the hike to point out mangled tree trunks poking out of the hillside and the varying forms of volcanic rock deposits scattered throughout the creek bed. Sporting a ponytail and a beer belly, Corpuz also offered a bit of off-color levity. He snubbed out a cigarette as we rested in the shade about a mile down from the summit, then told us a well-worn joke about two bulls on a hill.

When we reached the crater, our guides set up camp at the lakeshore, putting up two dome tents to shade us from the sun. They provided a cold lunch of  chicken, pork adobe and rice. As we ate, Robin’s associate, Ronaldo Petchalin (who goes by the nickname Nardo), played ‘80s hits from the tiny speakers on his cellphone. He serenaded us while we polished off the food, singing aloud to the chorus of “Carrie,” the 1987 power ballad by the Swedish rock band Europe. 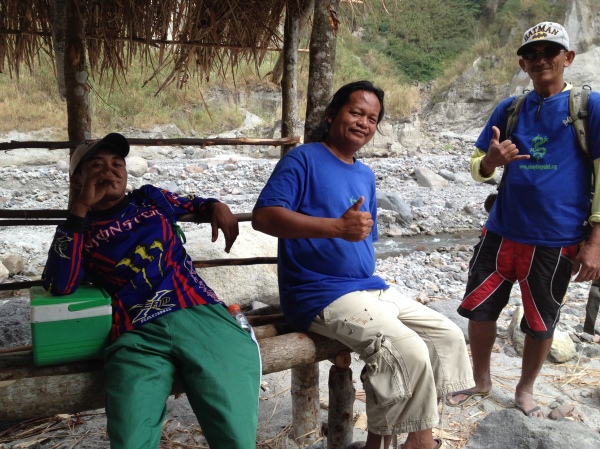 Coincidentally, Nardo, age 45, told me he was one of about 200 volunteers who took up picks and shovels and dug a canal at Pinatubo’s crater lake in 2001, in an attempt to guard against flash floods. After aiding in the effort that successfully allowed water to flow down from the lake at the Maraunot notch, Nardo said he was airlifted to safety by helicopter. Both Nardo and Robin hail from nearby Tarlac City, which is situated in the lowlands off the northeast side of the mountain. They each witnessed the huge mushroom cloud that formed above Mt. Pinatubo on June 12, 1991—an ominous harbinger of things to come.

“The volcano really got mad inside,” Robin said.

United States Geological Survey statistics show that when the volcano erupted three days later, it released about 20 million tons of sulfur dioxide into the stratosphere, which caused the average global temperature to decrease by one degree Fahrenheit until 1993. It was the second largest eruption of the 20th Century. Ash from the blast fell on Manila, more than 60 miles south.

Later in the afternoon during the off-road ride down the mountain, we crisscrossed the stream bed multiple times, the Jeep slowly rumbling through the swift current and over sizable boulders. Eventually, we rolled by a collection of Aeta children bathing in the creek. The kids shouted in unison, calling out to us in an indigenous language we did not understand. Thoroughly exhausted after the day on the mountain, our group was relieved to be headed back to civilization.